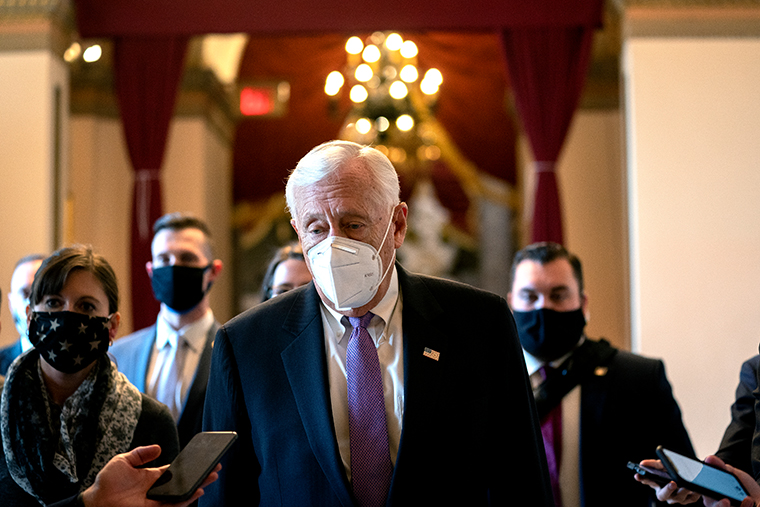 House Majority Leader Steny Hoyer predicted confidently that the House would easily clear the Senate-passed Covid bill when it returns to the House chamber next week.

He shut down the possibility that progressives, who have said they will do anything to get minimum wage passed, would go as far as not supporting the final version of the legislation if the key proposal is not included.

"I cannot believe that the people who voted to send it to the Senate will not also vote to pass it and send it to the president for his signature,” Hoyer told reporters. "It’s going to pass when it comes back."

This prediction comes as progressives are exploring all options to force the minimum wage provision in this reconciliation process.

By the same token, Hoyer drew a line saying he did not expect any Senator to add an amendment to the legislation that would make it an issue passing back in the House, stating “I can’t believe that any amendment that the Senate could adopt” that would be “so egregious that the House would not vote for it."

Hoyer said he expects the Senate to pass their version of the Covid relief bill on Friday or Saturday and that the House will take it back up on Monday, which is why he said he changed the schedule for next week.

Asked if he agreed with arguments made by progressives that the reconciliation process is the best way to pass Covid relief because it does not require support from Republicans, Hoyer said that the White House has made its calculation and clearly is not going to overrule the parliamentarian and therefore the path forward is for Democrats to think about how they can work with Republicans to get the measure passed after passing a stand-alone bill in the House.

“We're going to have to work with Republicans,” Hoyer said. “We're going to send that over to the Senate, and hope that in the Senate, there are 10 senators who believe that having people work for $7.25, an hour and in poverty after 40 hours of work week is not right in America.”

Hoyer did say that he believed the filibuster was “undemocratic,” tapping into a long-held argument by progressives, and potentially the next frontier of the minimum wage fight.